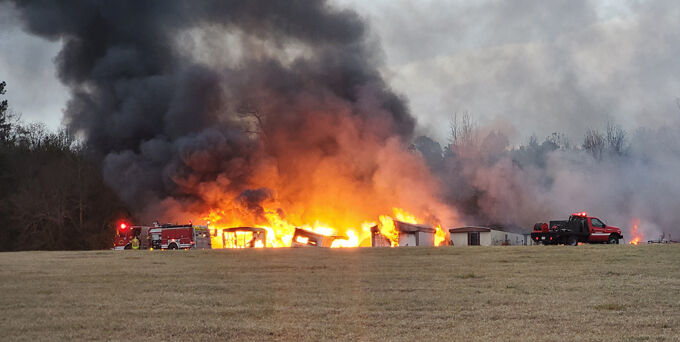 A late Wednesday afternoon grass fire resulted in numerous vacant mobile homes going up in flames. It happened shortly after 4:00 near the intersection of Highway 190 West at County Road 138.

Beech Grove Fire Chief Jamie Gunter said that a total of eleven mobile homes had been destroyed. He said it appeared that someone had been burning trash nearby earlier in the day.

Gunter also noted that it was originally thought that they were old FEMA trailers being kept in storage, but it turned out that they were actually old mobile homes that had been traded in to McDonald Mobile Homes in Jasper to purchase new homes.

Firefighters arrived to find the flames creeping towards a wood line and quickly asked for assistance from the Texas A&M Forest Service.

Fortunately, the blaze was stopped before it reached the woods.