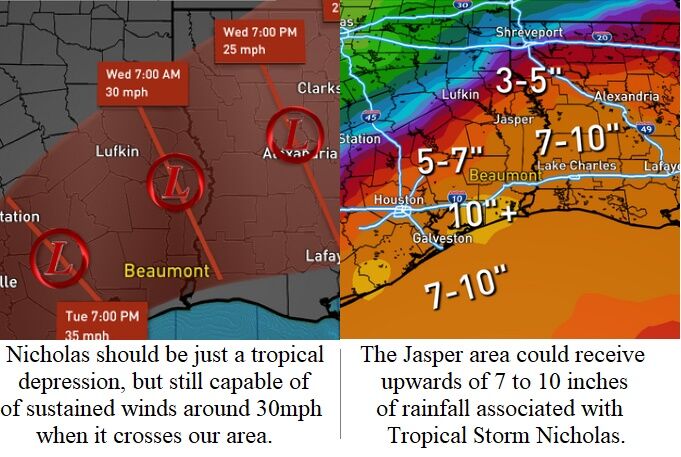 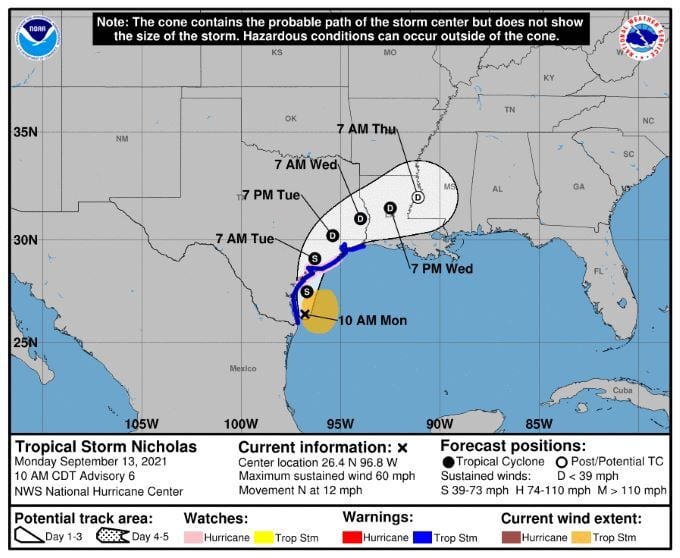 Forecasters say Nicholas will make landfall on the mid-Texas Gulf Coast most likely as a strong tropical storm, with a very slight possibility of becoming a weak category 1 hurricane just prior to landfall.

As for Deep East Texas, Nicholas should remain as a tropical storm well inland, dropping to a tropical depression as the center of circulation curves to an eastward trek, passing to the west and then to the north of the Jasper area.

Forecasters say our area is not expected to experience any significant winds, but instead rain will be our biggest factor with anywhere from 6 to 8 inches of rainfall possible for the Woodville/Jasper/Newton area, and 8 to 10 inches possible for the southern portions of Tyler, Jasper, and Newton Counties.

The following is the 10:00 a.m. update from the National Hurricane Center in Miami, FL:

A Storm Surge Warning is in effect for...

A Hurricane Watch is in effect for...

A Tropical Storm Warning is in effect for...

* Mouth of the Rio Grande to Sabine Pass

A Storm Surge Watch is in effect for...

A couple of tornadoes are possible this afternoon and tonight across the middle and upper Texas coast.

At 10 a.m. CDT, the center of Tropical Storm Nicholas was located over the western Gulf of Mexico about 45 miles (70 km) northeast of the mouth of the Rio Grande River and about 140 miles (225 km) south of Port O'Connor, Texas. Nicholas is moving toward the north near 12 mph (19 km/h) and this general motion is expected to continue today, followed by a turn toward the north-northeast on Tuesday. On the forecast track, the center of Nicholas will pass near or just offshore of the coast of south Texas this morning and move onshore along the coast of south or central Texas late this afternoon or this evening.

Data from the reconnaissance aircraft indicate that maximum sustained winds remain near 60 mph (95 km/h) with higher gusts. Tropical-storm-force winds extend outward up to 115 miles (185 km) from the center. NOAA buoy 42020 located southeast of Corpus Christi, Texas, recently reported a sustained wind of 40 mph (65 km/h). The minimum central pressure recently measured by the aircraft is 1002 mb (29.59 inches). Strengthening is forecast to occur today, and Nicholas could reach the northwest Gulf coast as a hurricane. Weakening is anticipated on Tuesday and Wednesday while Nicholas moves over land.

The combination of a dangerous storm surge and the tide will cause normally dry areas near the coast to be flooded by rising waters moving inland from the shoreline. The water could reach the following heights above ground somewhere in the indicated areas if the peak surge occurs at the time of high tide:

Nicholas is expected to produce storm total rainfall of 8 to 16 inches, with isolated maximum amounts of 20 inches, across portions of the middle and upper Texas coastal areas through the middle of the week. Life-threatening, flash and urban flooding impacts are possible, especially across portions of the upper Texas Gulf Coast near Lake Jackson and Freeport, TX. Across the rest of southeast Texas into southwest Louisiana rainfall of 5 to 10 inches is expected. This rainfall may produce areas of considerable flash and urban flooding, especially in highly urbanized metropolitan areas. Additionally, there is the potential for isolated minor to moderate river flooding..

Swells generated by Nicholas will continue affecting portions of the northwest Gulf coast through Tuesday. These swells are likely to cause life-threatening surf and rip current conditions. Please consult products from your local weather office - www.weather.gov

The next complete advisory will be issued by NHC at 4 p.m. CDT with an intermediate advisory at 1 p.m. CDT - www.hurricanes.gov