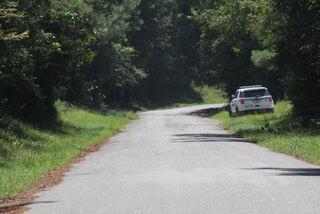 A Jasper County Sheriff's Deputy watches road where the run away suspects were last seen. 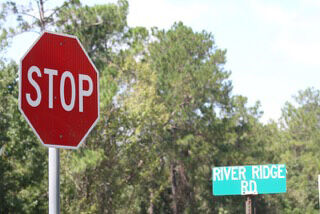 The run away vehicle was found abandoned on County Road 82, commonly known as River Ridge Road.

A Jasper County Sheriff's Deputy watches road where the run away suspects were last seen.

The run away vehicle was found abandoned on County Road 82, commonly known as River Ridge Road.

Jasper County Sheriff Mitchel Newman said shortly before noon on Monday that officers from his department along with other law enforcement agencies were looking for two suspects who were reportedly on the run following a chase.

Newman said the series of events began around 10:00 am when Jasper County Precinct 2 Constable Niles Nichols attempted to stop what was said to be a suspicious vehicle on Highway 96, north of Jasper, near Miller’s Grocery.

According to Newman, the vehicle which was only described as a white Hyundai failed to stop and instead took off at a high rate of speed. Newman said the vehicle which was being chased by Nichols and others traveled south on Highway 96, before turning west on Farm to Market Road 2800. Newman said as the chase continued officers lost site of the vehicle but found it a few minutes later wrecked out and abandoned on County Road 82, also known as River Ridge Road.

Officers surrounded the area and at last word were still looking for the occupants of the car that were only described as a white male and female.

Newman said it was believed that the couple might have been involved in the theft of copper. However, Newman did not say where or when the event occurred.

Newman and others are asking residents living in the area to secure their homes and vehicles and most of all, be on the lookout for the individuals.