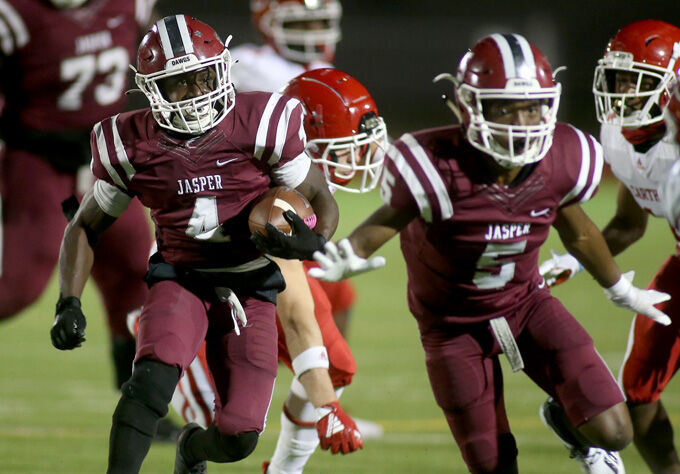 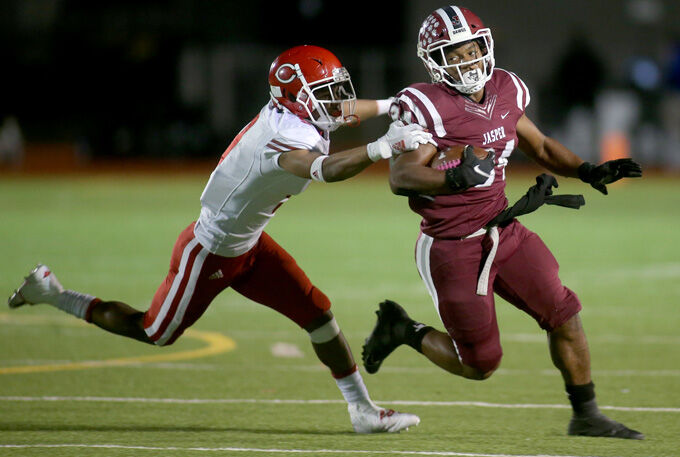 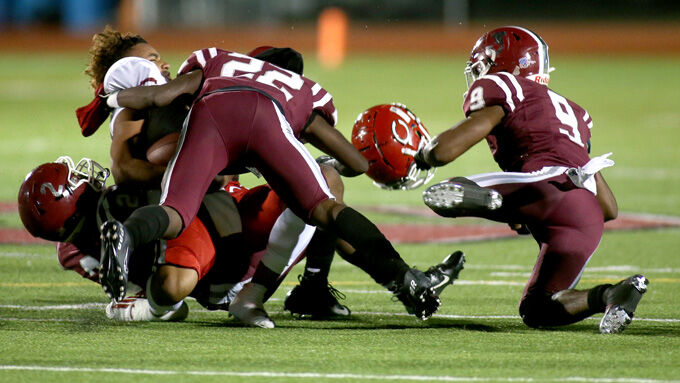 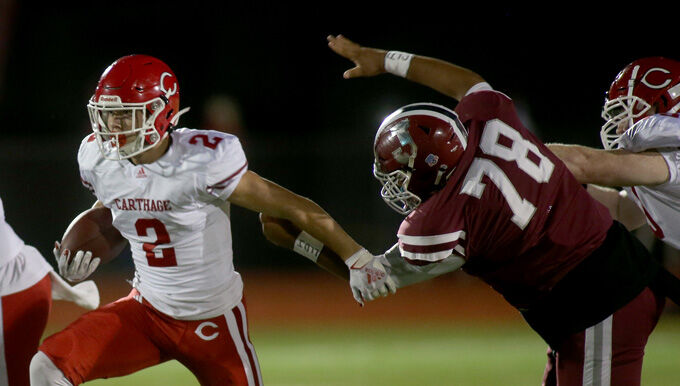 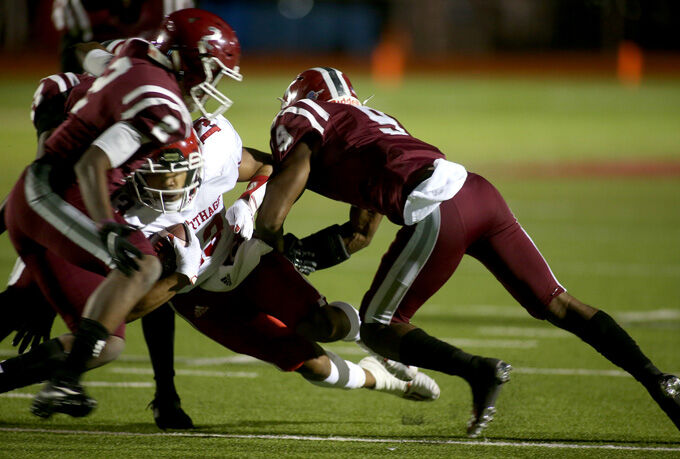 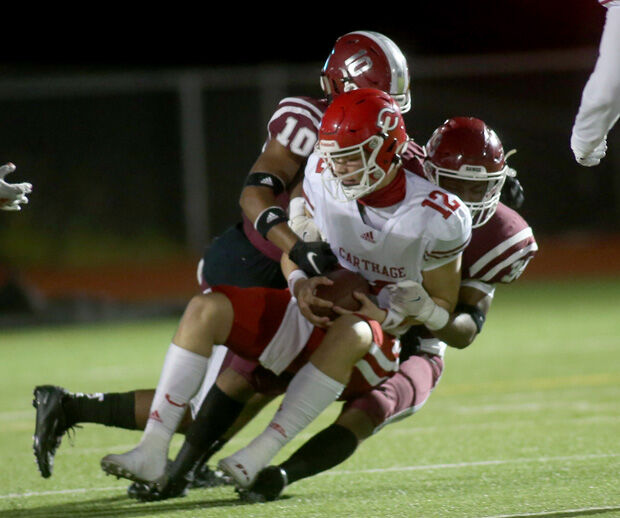 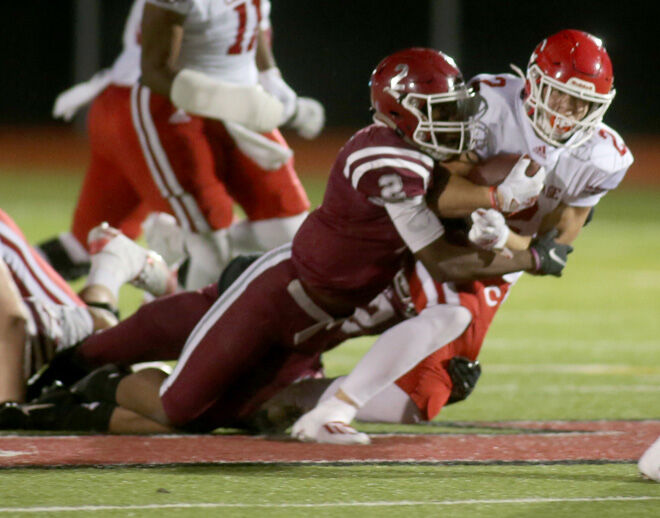 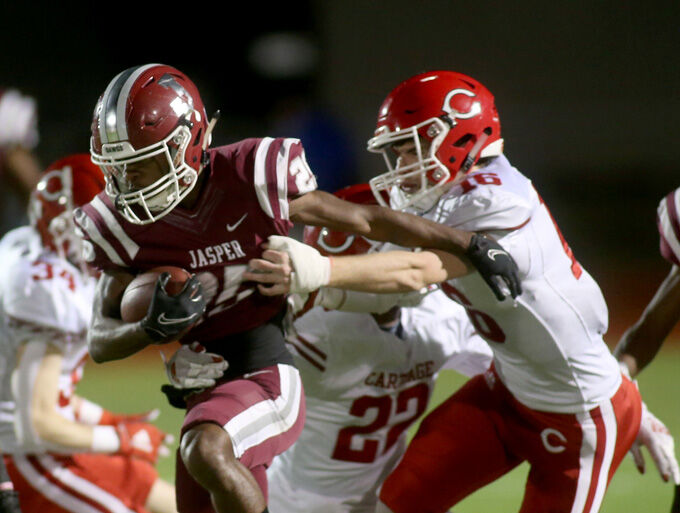 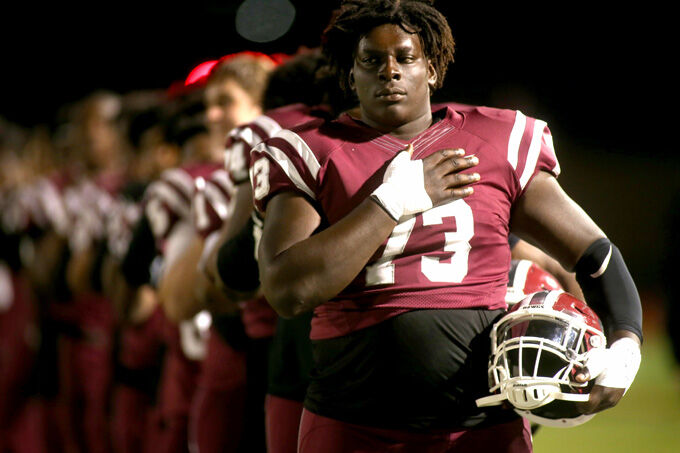 ShunMarkus Adams during the National Anthum prior to action between Jasper and Carthage, Friday October 16, 2020. Photo by Ricky Moon 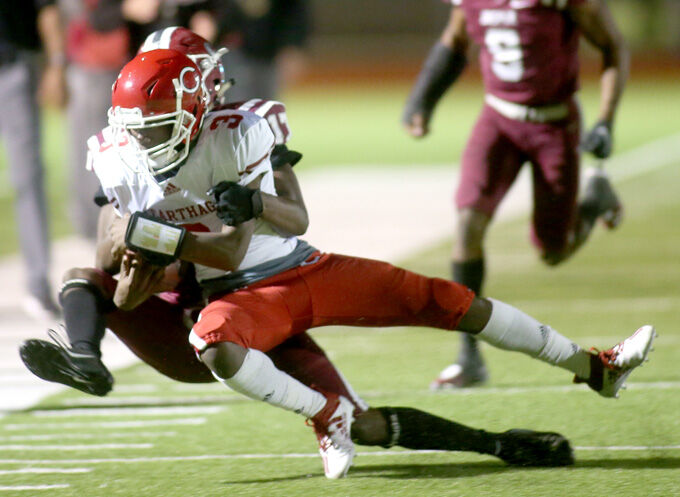 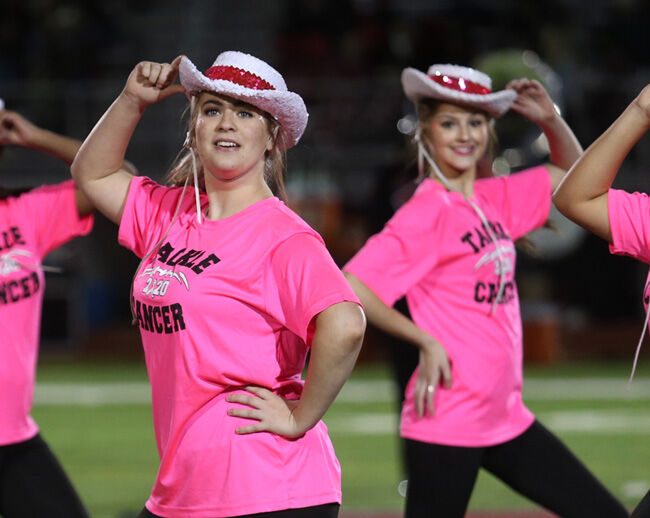 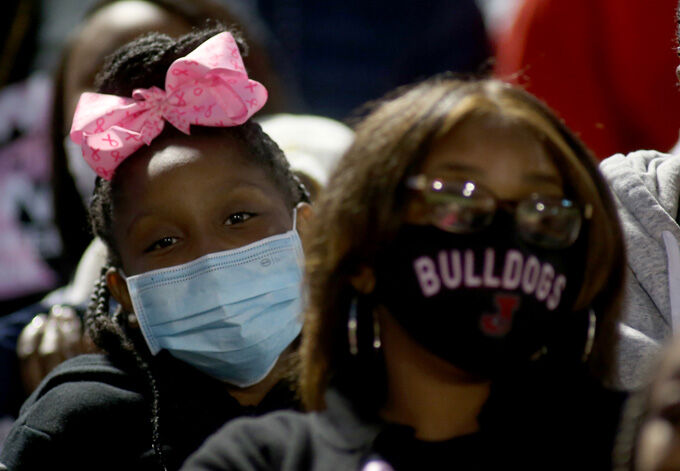 Young Jasper fans wait for the start of game acti between Jasper and Carthage, Friday October 16, 2020. Photo by Ricky Moon 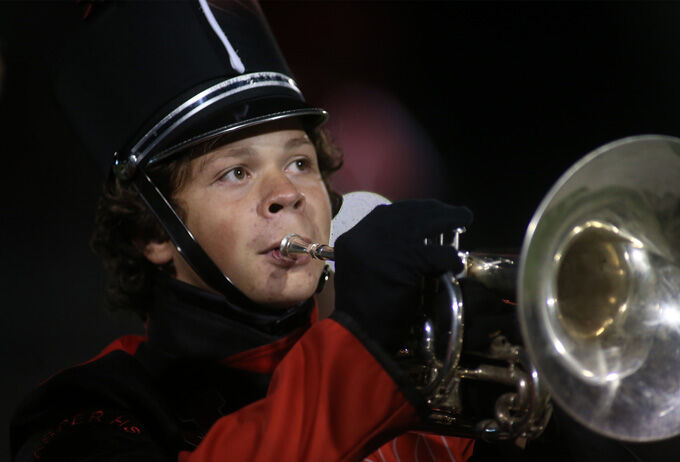 ShunMarkus Adams during the National Anthum prior to action between Jasper and Carthage, Friday October 16, 2020. Photo by Ricky Moon

Young Jasper fans wait for the start of game acti between Jasper and Carthage, Friday October 16, 2020. Photo by Ricky Moon

The #4 state ranked Jasper Bulldogs proved on Friday night that they could hang with the #1 state ranked Carthage Bulldogs, but Jasper also demonstrated that penalties can and will negate all that they accomplished. The two teams had a tight game through the first half here in Jasper on Friday night, but mistakes and penalties committed by Jasper allowed Carthage to pull away in the second half and they ran away with a 35-18 win.

Carthage took the opening kickoff and drew first blood when they scored a touchdown following a long drive and went up 7-0.

Things looked bleak very early on when Carthage kicked off to Jasper and a Jasper player mishandled the ball and it was recovered by Carthage. However, the Carthage quarterback went to the air and he was intercepted by Jasper’s Andre Thomas who returned it all the way back to the Carthage 30 yard line. Carthage received a facemask penalty when Thomas was slung around and dragged down by his facemask, so that moved the ball to the Carthage 15.

Momentum was still on Jasper’s side. On the ensuing kickoff a Carthage player fumbled and it was recovered by Jasper at the Carthage 40.

Unfortunately, that’s when penalties and mistakes kicked in for Jasper and despite being in excellent scoring position to go ahead, it was two steps back for every step forward. Jasper ultimately turned it over on downs, and Carthage capitalized by driving 60 yards to another touchdown to take a 14-7 lead late in the 1st quarter.

On Jasper’s next possession, power running from Limbrick and Thomas pushed the Dawgs deep down into Carthage territory, but more penalties cost Jasper. The Dawgs opted to try a field goal on 4th down and Ayden Garcia was good from 20 yards out. That narrowed Carthage’s lead to 14-10.

Carthage closed out the first half scoring by punching in a TD with just 10 seconds on the clock, and the two squads went in at the half with Jasper trailing 21-10.

Mistakes continued to haunt Jasper in the second half. After taking the kickoff to begin the 3rd quarter, Jasper quarterback Trashawn Adams was intercepted by a Carthage defender. They capitalized on the turnover by driving down to another TD and stretching out their lead to 28-10.

Carthage padded that lead late in the 3rd quarter with another touchdown, which put them up 35-10. Jasper managed to score with just a few seconds left in the game and also converted for 2 to make the final score Carthage 35, Jasper 18.

Jasper is now 5-1 and they’ll be on the road next week to play Shepherd on Friday night at 7:30.